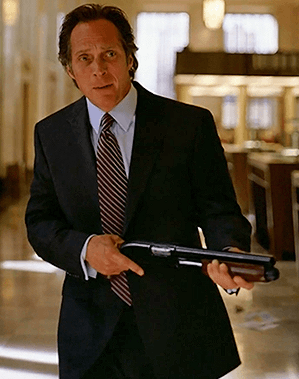 As you can see, there is a huge difference between a bank manager and a bank manager who works in a mob bank.
"Sawed-off shotgun, hand on the pump"
— Cypress Hill, Hand on The Pump

If you're a badass and you want your firearm to represent how awesome you are, there's only one choice for you - the Hillbilly Dueling Pistol, AKA the sawed-off shotgun. It is a standard weapon for anyone in the middle of a Zombie Apocalypse. In the hands of a suitable badass, it can take out anyone in a single blast. The sound of chambering a round in a pump-action sawed-off is like a Catchphrase showing how awesome you are — for extra badassitude, you hold it by the slide and sort of wave it in the air, allowing the weapon's own weight to do the chambering (this is a great way to ruin your shotgun in real life, FYI). And if you have a sawed-off double barrel shotgun with dual triggers, you have the option of either unloading one barrel at a time at an opponent, or "giving 'em both barrels," as it were (also an excellent way to destroy it, and your shoulder, too).

In popular media, the sawed-off shotgun combines the power of a shotgun with the profile of a large handgun. It's also easy to make - all you need is a regular shotgun and a hacksaw, it seems. Its popularity easily eclipses all guns aside from the most famous, like the Desert Eagle.

In real life, sawed-off shotguns aren't very practical. Contrary to popular belief, shortening the barrel of a shotgun has little effect on the spread of the shot - the spread is actually purposely limited with a 'choke' inside the very tip of the barrel, so you'll get basically the same change whether you saw off 2 inches or 20 inches. Shortening the barrel has different effects depending on the era. Until the advent of high quality smokeless gunpowder, longer barrels on shotguns allowed for more velocity, and a sawed-off shotgun would have reduced power because of the reduced velocity. Modern powders lose extremely little velocity even when the barrel is cut down to a foot long.note Strictly speaking, longer barrels do somewhat increase muzzle velocity because the propellant has that much longer to "push" the projectile. However, shotgun ammunition, particularly pellets, lose velocity rapidly enough that this doesn't really matter. However, the biggest problem with sawed-off shotguns is when the stock is cut down to a pistol grip, making the weapon either extremely hard to aim, or, if aimed properly, extremely likely to recoil straight into the shooter's teeth.

In close quarters, the abilities to hide the gun until the last possible second and place it on-target without the barrel getting caught up on a close-in object like a wall are valuable, but this has the unfortunate effect of making the gun a gangster's weapon fit mostly for assassins or poachers and therefore carry many legal restrictions for civilian users.

Some law enforcement agencies use compact shotguns for breaching — that is, shooting hinges and locks off doors for expedient entry. There are even shotguns designed for this that can be mounted underneath the barrel of an assault rifle, in the same way as an M203 Grenade Launcher (one of the most well-known is even rather humorously called the "Masterkey"). A sawed-off shotgun is also more easily concealed than the full-sized variety, so they are often used by criminals (bank robbers are a common example), especially in countries where normal handguns may be difficult to procure but hunting shotguns are relatively easy to buy.

This trope is very prominent in British TV shows, where the sawed-off shotgun remains the weapon of choice for the London Gangster, or the villains in any police procedural, particularly if it involves an Armed Blag. This is mainly due to the difficulty of obtaining handguns in the UK, while shotguns are still legally available to get in the UK, they're just quite a lot harder to get a hold of compared to the US. Incidentally, British English speakers prefer saying "sawn-off" shotgun (the past participle), while American English speakers say "sawed-off" shotgun instead (the past preterite), since while this sounds perfectly fine to American ears, to British ones, it sounds quite a lot like something else* i.e. "Sod off!", a less-nice way of saying "go away" but a less-crude way of saying "fuck off", and occasionally used as a mild insult, though it still works pretty well, considering the context (who wouldn't want to get lost if one of these was pointed at them?).

Finally, a minor note: as you may have realized, there's nothing particular to shotguns that only they would receive this treatment. As long as you mostly know how to do it, you can saw excess barrel off other long firearms as well. However, shotguns seem to be the most associated with the act, and while others (mostly rifles) do appear in fiction once in a while, they have apparently not earned the kind of notoriety that would separate them from shotguns trope-wise.