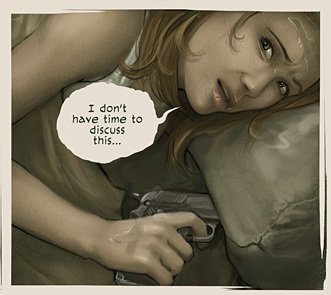 "...I WILL win this pillow fight, at any cost!"
"Tell me, James, do you still sleep with a gun under your pillow?"
— Paris Carver, Tomorrow Never Dies
Advertisement:

Worried about hostile burglars or people after your life? Haven't got a skimpy nightdress? Have a reason to be Properly Paranoid? Try the Pillow Pistol!

This handy accessory fits under your pillow, allowing you to be fully armed in the event of strange nocturnal noises. The pillow is also a handy silencer! Just be careful not to shoot yourself or your sleeping partner. Or anyone trying to wake you up. A variation of this is when you are actually holding the gun while sleeping, but it is not under your pillow. A melee weapon such as sword, dagger or hand axe will also do the trick.

In real life, this is very risky and has caused some fatal accidents. Don't Try This at Home, at least not without some kind of special mattress or pillow holster designed to prevent the gun from shifting and going off while you sleep. Even apart from that, somebody just waking up to investigate a disturbance is likely to have their senses and judgement dulled by grogginess, and might accidentally shoot a loved one by mistaking them for a home intruder.

Sometimes though there's also a more practical option where the gun or weapon is close by or even right beside the owner as they sleep. This also especially fits if the weapon they have isn't exactly capable of being hidden underneath a pillow.

Compare Hidden Supplies, Can't Bathe Without a Weapon. Not to be confused with Victoria's Secret Compartment, or for Pillow Fight where the pillow is the weapon. See also Pillow Silencer which can overlap with this trope depending on the context..