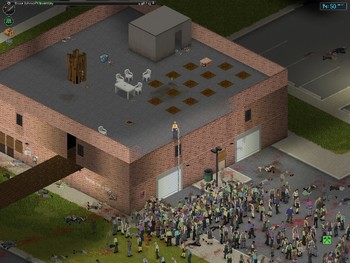 Oh, it's such a perfect day...
These are the end-times.
There was no hope of survival.
This is how you died.
Advertisement:

Project Zomboid is an isometric real-time zombie survival Western RPG being developed for PC by The Indie Stone, a British and Canadian team of four developers. It takes inspiration from games like Survival Crisis Z and XCOM. The team was at first known for having

as it rushed to meet the schedule to release a demo

in 2011. On 8th November, 2013, the game secured an Early Access launch on Steam, and it remains actively worked on in Early Access to this day. In December 2021 it received a major update reimplementing online multiplayer, which gave it a significant resurgence in popularity.

The game was initially set in a fictionalised version of Muldraugh, Kentucky; a small town by the side of a highway which includes a number of businesses, a large logging camp, some light industry, and various classes of housing. It has since expanded

to a detailed simulation of the whole county circa 1993, large enough to require vehicles to realistically travel from one end to another. There's also a day-night cycle, a cycle of seasons, and even a simulation of nature slowly taking over the abandoned areas. Farming, trapping, fishing, carpentry, cooking, character customization, skills and perks are all present; moreover, your character can also be afflicted with depression, boredom, hunger, thirst and illness as they try to survive. And of course, the game also simulates swarms of zombies that potentially number in the hundreds, and possess detailed visual and hearing systems to make sneaking past them a tough, but fair challenge.

Compare and contrast with Dead State, a different take on a zombie Western RPG from an indie developer, with less simulation but more focus on the story and Turn-Based Combat.