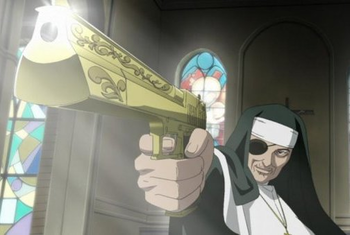 The Nun with the Golden Gun.
"An excellent gun, though the gold plating seems a bit over the top."
— ZPCI Sniper Rifle description, Sonny 2
Advertisement:

So, you're a badass warrior and have some money to burn. What do you do?

Why, gold plate your weapon of course! Or maybe add diamonds and all sorts of valuable crap just to show people you mean business. Or otherwise personalize your gun. Thankfully, most shows don't assume Viewers Are Morons by stating that a weapon is solid gold, as this would not be a very good idea due to the metal's relative softnessnote the bullet, on the other hand, often is solid gold, and this is

practical: Gold is heavier than lead, which many ordinary bullets are made of, and can be alloyed to make a hardened jacket. Silver weapons are seldom featured under this trope, since they're generally reserved for fighting supernatural creatures, plus the cultural view that silver is "second best". This trope is used to show that either the guy is so good he can spend the money he earns killing people, or he likes to add a "personal touch" to his weaponry.

Or maybe that he's just lame.

In shooting games, expect a tricked-out weapon to be a special unlock, with or without increased power. A common variant is an excessive amount of Gun Accessories.

A Sub-Trope of Cool, but Inefficient, Conspicuous Consumption, and Made O' Gold.