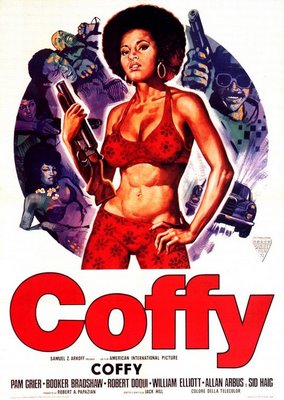 Although it wasn't her first movie, Coffy (1973) was the production that made Pam Grier a star of cult cinema. It was among the first notable Blaxploitation films, and one of the first action movies featuring a strong heroine. Writer-director Jack Hill, the creator of several exploitation flicks, found enough success with this movie to spawn a Spiritual Successor, Foxy Brown (1974).

Coffy is a young nurse whose sister is permanently brain damaged from having used tainted heroin. Traumatized by her sister's condition, Coffy hunts down the dealer who sold her sister the bad drug, seduces him under the pretense of needing heroin, then blows his head off.

Soon afterward, Coffy hears news of her work from childhood friend Carter (William Elliott), a police officer. Carter, unlike many of the local police and politicians, is a cop with integrity who refuses to be bought out by the mob. As a result, both he and Coffy are attacked by thugs, and Carter is hospitalized in critical condition. Coffy, pushed too far, goes on a rampage of vigilante justice, working her way up the chain of drug dealers and pimps, seeking to put an end to the mob influence at the source...permanently.