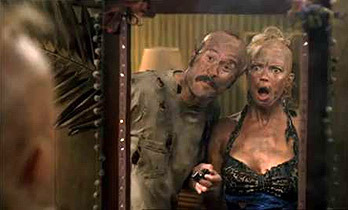 "Randy, come in here, we look like cartoons!"
"Forgot the sunscreen!"
— Every time a turtle is hit with a fire attack, Teenage Mutant Ninja Turtles: Turtles in Time
Advertisement:

This common visual gag was popularized in The Golden Age of Animation. It begins when an explosion occurs point-blank in someone's face, typically from an Explosive Cigar, ridiculous quantities of TNT/dynamite, or perhaps an amusing gunfire incident since guns often emit directed explosions rather than propelling bullets. Depending on the situation, other sudden sources of heat will also result in ash faces — a cartoon character on the wrong end of a gout of fire, a short circuit or a lightning strike is also liable to end up with a faceful of soot. After the smoke clears, the target is shown with his face covered in black ash and their eyes brightly visible. Usually, the subject will quickly shake off the ash and return to the wacky hijinx. If the explosion is large enough, the target's entire body will be covered instead. Sometimes, they let out a cough and puff out a smoke ring.

In older works, this was often an excuse for a Blackface gag/minstrel musical number.

Most frequently seen in Zany Cartoons and other visual comedies. This trope has been appearing less frequently in current times, possibly due to concerns about children trying to mimic the act, and to avoid unwanted suggestions of Blackface (Note that some cartoons really did use Blackface as part of the gag). The latter is sometimes sidestepped by having the ash be pale-gray instead of black, which is actually quite commonplace in anime.

Can be justified in works aimed at younger audiences, since in Real Life the effects of a character having something blown up in his or her face would not be funny at all.

A Sub-Trope of Non-Fatal Explosions, Artistic License – Explosives, and Amusing Injuries. Also see Sweeping Ashes. Can be the result of attempting Finger Extinguisher. Somewhat related to X-Ray Sparks. Does not have anything to do with making your face have a Bruce Campbell grin, or being a famous Pokémon Trainer, for that matter.

"Well, at least I still have my personality."

While driving around town, SpongeBob and his heroes Mermaidman and Barnacle Boy encounter the fish who used to be called the Atomic Flounder, who proves that even though he's retired, he's still got some villainy in him.

While driving around town, SpongeBob and his heroes Mermaidman and Barnacle Boy encounter the fish who used to be called the Atomic Flounder, who proves that even though he's retired, he's still got some villainy in him.