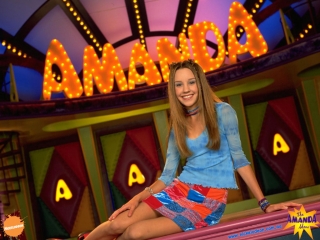 The Amanda Show was an All That Spin-Off starring Amanda Bynes that ran from 1999 to 2002. It was a sketch comedy created by Dan Schneider, starring Amanda and helped to build the careers of Drake Bell and Josh Peck. A Running Gag revolved around a super fan of the show Penelope Taynt constantly trying to break into the studio to meet Amanda. As Penelope was played by Amanda herself, you can guess how successful she was.

The show's Amanda Please website—designed in-universe by Penelope—notably stayed on the web for nearly 15 years, even after the show was long since cancelled, but it was sadly taken off in 2015 as part of a rehaul of Nickelodeon's website. Thankfully, that's why we have the Wayback Machine.

Examples of tropes found on The Amanda Show, please!: