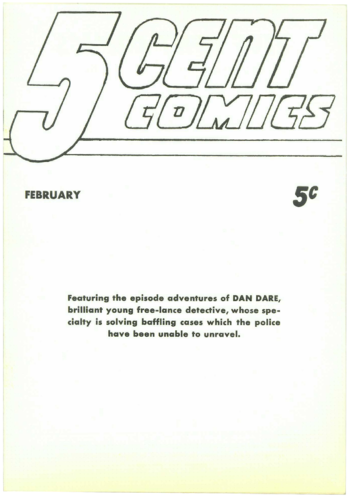 The humble, but legally sufficient, debut of Dan Dare.note An American detective character from the 1940s, not the British space explorer of the same name.
Advertisement:

A cheaply and quickly produced work, not intended to be shown to the masses and disseminated only to the minimum extent required to fulfill some non-artistic obligation like claiming a trademark.

The term originated in The Golden Age of Comic Books, when there was a big rush to copyright as many characters and titles as possible, but the production time available was measured in days or hours, far too short to put out a real comic. The solution? Create a simple mock comic, often just a cover and some unrelated filler made up of garbage sheets, and submit it to the copyright office. The term itself comes from the fact that these comics often weren't actually distributed to newsstands, just going straight to the ashcan (period vernacular for trashcan) once their purpose had been served.

Starting in The Dark Age of Comic Books, an "ashcan" copy of a comic, often black and white and limited in distribution, would sometimes be distributed as a promotional item. These comics were called "ashcans" for marketing reasons (i.e. to imply rarity and value like the Golden Age versions) but really had little to do with Golden Age ashcans.

In the wider culture, "ashcan copy" has stuck around to describe any crappy proof-of-sort-of-concept work that exists solely because of the strange intricacies of trademark and licensing law — especially in the US, where television or movie adaptation contracts often have a "use it or lose it" expiration date by which a license must be exercised to prevent reversion to the original rights holder.

While the Ashcan Copy originated in comics, many contemporary cases involve movie concepts optioned from other media, as such contracts usually include reversion clauses and film development is a notoriously lengthy and troubled process. A similar practice exists in television programming, where episodes of cancelled series are "burned off" in graveyard time slots.

If, by chance, these works ever actually do see distribution, expect them to become infamous. See also Franchise Zombie for other examples of shameless IP exploitation. Compare with Contractual Obligation Project; a situation where a work must be completed because it is mandated as opposed to being done to prevent an outcome.

Do not confuse with a somewhat wider use of the term (jocularly with a bit of Self-Deprecation, like miniature comics for promo, mostly freebie), which technically is no longer this trope.