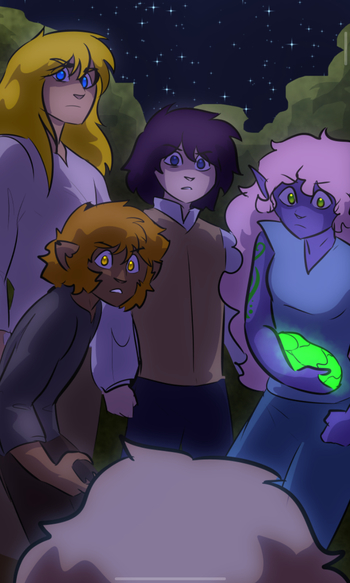 Aurora is an ongoing webcomic started in April 2019 written and illustrated by Red of Overly Sarcastic Productions. It is a High Fantasy webcomic that begins when an entity known as the Collector steals the soul of the god Vash and departs with it. However, Vash’s body is not ready to die and somehow retains an entirely new consciousness who sets out with a mage named Alinua to get back Vash’s soul.

As of May 2022, the webcomic is seventeen chapters into the first arc. It is updated on Mondays, Wednesdays, and Fridays.

The webcomic can be found here

, as a backup in case of site difficulties. The official Twitter account (run by Red) can be found here

. If you want to talk about the comic, you can go to the discord

) is in the process of recording. Other forms of media with a similar name can be found here.

For the first three chapters, Kendal didn't see the point in giving himself a name. He only named himself because Alinua insisted.

Example of:
No Need for Names

For the first three chapters, Kendal didn't see the point in giving himself a name. He only named himself because Alinua insisted.