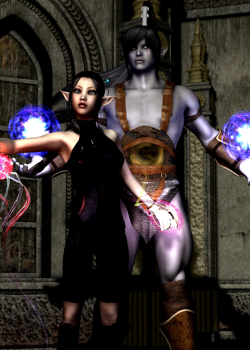 Erin and Merror
"Honor isn't about making the right choices. It's about dealing with the consequences."

Consequences of Choice is an Epic Fantasy webcomic which was launched in July of 2011 and continues to update daily.

Two people who were never destined to meet cross paths and rewrite not only their own destinies but countless others. Now they must face off with justified evil, racial and social prejudice, hypocrisy and the consequences of their own choices.