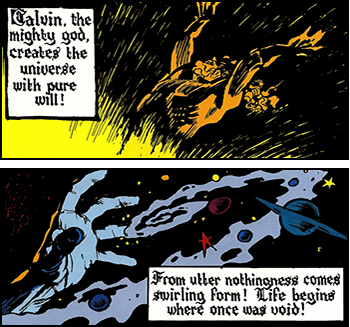 These truths the Maker has revealed to me:
As there is but one world,
One life, one death, there is
But one god, and He is our Maker.
— Chant of Light, Transfigurations 1, Dragon Age
Advertisement:

A person/people (often a god, although the occasional Mad Scientist or Evilutionary Biologist dabbles in this as well), that has/have created an entire place or species. Frequently in fantasy fiction, there are often several creators of the races that inhabit the world, and the ones who created them are often labeled as the Top God of the race's respective pantheon. The creator of the world or setting is often above these gods, someone who may in fact be the true Top God.

A common subtype has a being that personally created the monsters of the setting, which is usually inspired by Echidna

, who mothered so many of the monsters found throughout Greek Mythology to earn the title "Mother of Monsters."

A Creation Myth often involves a character of this type, although what's made could have been created without the involvement of any being whatsoever. Some type of spontaneous generation, perhaps? See also The Power of Creation.

Contrast Destroyer Deity (if the maker happens to be God, the destroyer deity is likely to be The Anti-God), though some gods may be enough of a multitasker that they combine both the creator and destroyer god roles.

Don't confuse with Thank the Maker. For the comic book character, see The Maker.