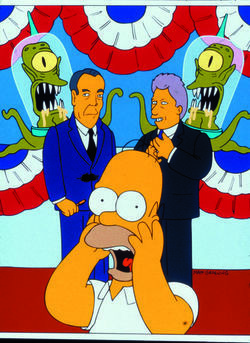 This year's tales of terror include Bart meeting his long-lost Siamese Twin who lives in the attic and has gone insane, Lisa becoming a goddess to a small civilization she created out of a tooth, some cola, and Bart zapping her with static electricity, and Homer trying to stop Kang and Kodos from posing as Bill Clinton and Bob Dole and running for U.S. President.

Homer puts a unique spin on this trope.

Example of:
I Have a Family

Homer puts a unique spin on this trope.