You may be looking for the Inheritance Cycle, by Christopher Paolini. 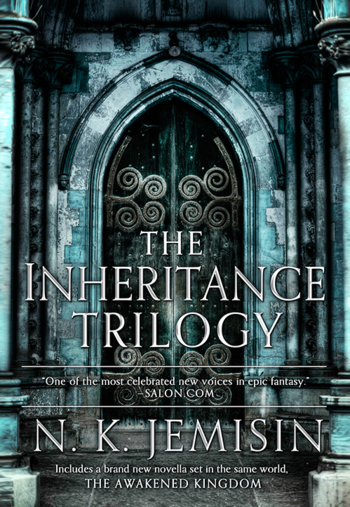 There were three gods once... the god of day, the god of night, and the goddess of twilight and dawn. Or light and darkness and the shades between. Or order, chaos, and balance. None of that is important because one of them died, the other might as well have, and the last is the only one who matters anymore.
— Yeine, The Hundred Thousand Kingdoms
Advertisement:

The Inheritance Trilogy is a series of books by N. K. Jemisin about a world where gods walk the earth alongside mortals (though, in general, not voluntarily). The Hundred Thousand Kingdoms and The Broken Kingdoms; both came out in 2010, and the third and final book, The Kingdom of Gods, came out in 2011.

The Hundred Thousand Kingdoms details the life of Yeine, a noblewoman from the northern continent of Darr. She is called to the aptly-named capital city of Sky where she is unexpectedly made a candidate for the title of Arameri family head, or emperor of the world. Not all is as it seems, however, as petty squabbles break out, Living Weapons act friendly, and the time of the coronation draws ever closer...

A major subplot of the book deals with the war of the Three, the tribunal of creator gods; their children; and its aftermath. One of the Three, Enefa, was slain, one, Nahadoth, was imprisoned, and the third, Itempas, took over the world. Various lesser gods are imprisoned along with Nahadoth and take up the name of Enefadeh, or "we who remember Enefa."

The story continues in The Broken Kingdoms, set ten years after the first book, and starts off with the blind artist Oree Shoth finding a dead god in her rubbish... who isn't so dead after all, and proceeds to cause a whole lot of trouble for her. Oree and her intensely irritating new lodger have to navigate their way through a maze of former lovers, past crimes and timeless sorrows, in order to get to the bottom of why someone is killing godlings and making an attempt on the existence of one of the Three.

And the story is concluded in Kingdom of the Gods when Sieh the Trickster, firstborn of all the Three's children, forms a tentative friendship with the twin heirs to the Arameri — and it all goes disastrously wrong. (Or right.)

A fascinating tale of what could happen if the gods created humans in their image, humans turned on them, and by extension, the gods had all the faults that humans do.

The Inheritance Trilogy contains examples of: