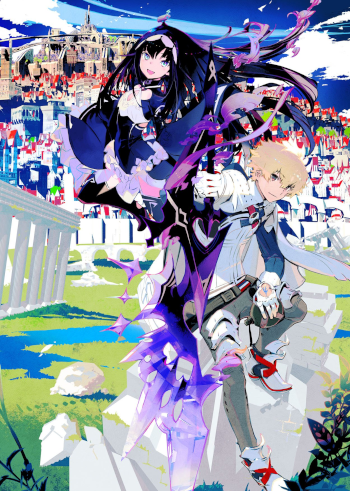 By the 2030s, technology had advanced to the point where game companies could make the elusive "full-dive VRMMO" a reality... but even the finest titles of the genre turned out to be little more than expensive vomiting simulators. That was, until the release of Infinite Dendrogram in 2043 - a game that eclipsed all prior VR technology (and game technology in general) by an almost frightening degree, with hardware sold at prices too cheap to believe. Dendro boasts hundreds of classes, a single server that can handle millions of players with no lag or downtime, and a vibrant world of impossibly lifelike Non Player Characters where time progresses three times faster inside than outside. Each "Master" (Dendro's term for players) is gifted with an Embyro - an Empathic Weapon (or a Mon, a Cool Bike, a castle, an artificial heart...) which grows alongside them, gaining unique and powerful abilities which make no two players the same.

About two years after launch, college student Reiji Mukodori purchases a copy of the game over summer vacation, creating his character Ray Starling. After his first adventure with his veteran older brother Shu places him up against impossible odds, his persistence triggers the birth of his Embryo as Nemesis, a Maiden-with-Arms type specialised in Counter Attacks against strong foes. Taking up the Paladin class, Ray begins his journey into the world of Dendro, a game of limitless depth and filled with colourful characters. That is, if it's really a game at all...

) and illustrated by Taiki. An English translation

is available from J-Novel Club, with 13 volumes as of December 2020.

The series has a manga adaptation with art by Kami Imai, as well as an anime airing Spring 2020.

A Spin-Off manga, Crow Record: Infinite Dendrogram Another is told from the perspective of Juliet, one of Gideon's duel rankers.

This light novel carries examples of: