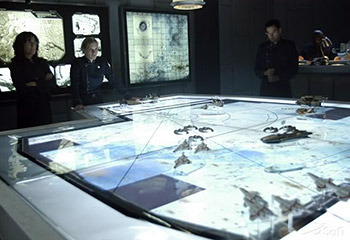 Don't be fooled. They are actually just playing Battlestar Galactica: The Board Game.
"Are you aware of what a serious breach of security that would be? He'll see everything! He'll see the Big Board!"
— General "Buck" Turgidson, Dr. Strangelove
Advertisement:

A display (whiteboard, blackboard, chart, map, 3D hologram, whatever) can serve the dual purpose of establishing that the characters are evaluating information and providing quick exposition for the audience.

This trope includes tabletop maps where people use a "croupier stick" to move around counters. The Strategist, Insane Admiral, and The Brigadier tend to argue standing around this variety while in The War Room. General Ripper has a bad habit of breaking the pieces that stand for enemy troops. Chessmasters may use a literal chess board.

It also includes "vertical plotting boards". That's the clear piece of glass or plastic that, in the real world, is written on with a grease pencil backwards on warships. In fact, transparent versions are way more common in fiction than in reality—in the real world, their use is limited by the fact that they're hard to read, but in film and television they're frequently used as a way to get the standard "actor's face behind a sea of equations" shot. Also included are dioramas, which are simply models of buildings or areas.

May be used as an Exposition Diagram or Spreading Disaster Map Graphic.

Note that Reality Is Unrealistic and most examples of this look far more dramatic in media than in Real Life.

Not to be confused with Big Bad, the game board used on the game show Press Your Luck, or the level of the same name from Wario Land 4.