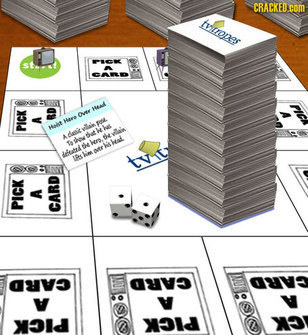 The game never ends.note See Hoist Hero over Head for the trope on the card.
Syd Lexia's

First Law of Pop Culture: If it was popular between 1975 and 1995, then there is a board game based on it.
Advertisement:

You've seen the movie. You've read the books. You've watched the entire TV series and achieved every ending in the video game.

Now it's time to play... the board game.

This is pretty much what it sounds like: A board-game adaptation of a popular book, movie, TV show, or even video game. A subtrope of this is the Home Game, for board-game adaptations of game shows. Common tropes include player markers shaped like characters or props from the work, landing spots on the board themed after places in the work's universe, and chance cards based on incidents from the work's history.

A Sub-Trope of The Merch.

See also: Themed Stock Board Game for when a pre-existing game is re-released in a special tie-in edition, and The Role-Playing Game for pen-and-paper adaptations.