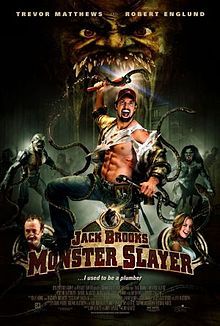 Jack Brooks: Monster Slayer is a Canadian Comedy Horror film starring (and produced by) Trevor Matthews, Robert Englund, and Daniel Kash. Matthews plays Jack Brooks, a plumber prone to sudden bouts of extreme rage. Englund is his professor, Crowley, who unearths a terrible evil. Jack Brooks must face his tragic past and find a way to channel the darkness inside of him.