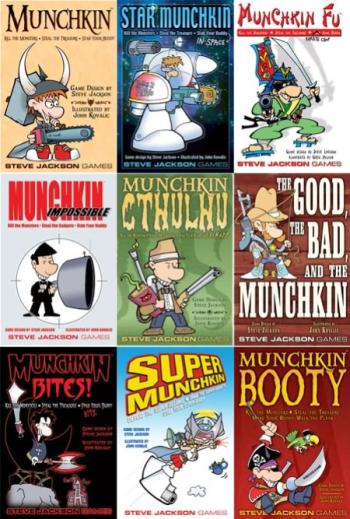 You are in a dungeon. Also present in this dungeon are monsters and treasure. You have been sent on a holy questnote Well, holy if you’re a cleric, maybe. Which you may be some of the time. to kill the monsters and steal the treasure. Unfortunately, everyone else in your party is trying to do the same thing. Hilarity Ensues.

is a card game series by Steve Jackson Games. The fundamental rules are simple and easy to learn, but the text on the cards regularly changes the rules. If you keep a sharp eye on what the rules say at this very moment, you will uncover situations where your half-Elf half-Halfling Warrior Cleric can wield four weapons at once, send any monster he fights over to another player instead, and get the treasure from it anyway.

This is very Munchkinly. Do it.

Games and expansions include:
Advertisement:

A Munchkin comic book series was published by the BOOM! Box imprint of Boom! Studios.

The art in the original game and many of the numerous supplements and variants is by John Kovalic, and while other artists have been brought in on occasion, Kovalic’s style is often considered a large factor in the game’s success.