Tabletop Game / Must Be Tuesday 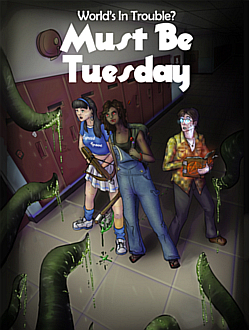 This next year is looking up, and the biggest difference that next year will bring is you. We strive to make all of our students feel that our school is a second home. Whether it be storage for strange green liquids, evening classes for more sun-averse students, or a place to just relax and recharge, we at Cypress Grove care about you.
— Introduction to Must Be Tuesday.
Advertisement:

Must Be Tuesday is a Table Top RPG designed by Erika Chappell, at that time a member of Contraption Studios (BLOODCRUSHER II).

Each week, players are thrust into the world of High School. However, not only do they have to worry about passing their Math Test or finding a date for the prom, they must also go face a monster that is looking to destroy/enslave the earth for power/funsies. To make matters worse, players themselves are also monsters, and while that monstrous half is their means of protection from the supernatural,it can also become their downfall, as straying too far into the supernatural makes it hard to perform mundane tasks, possibly turning players into the very thing they try to fight...

If you haven't noticed by now, it's pretty much the unofficial Buffy the Vampire Slayer the RPG.

The game can be bought here