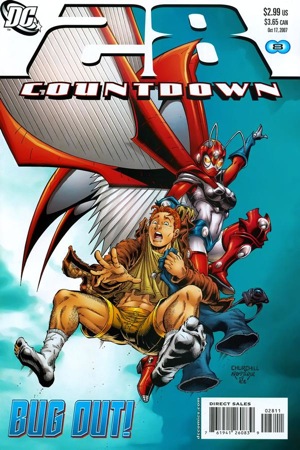 So now I'm being kidnapped by a bug-girl from outer space who's investigating the death of the New Gods, which has something to do with the fact that I just started inexplicably acquiring random superpowers for the 147th time. Must be Wednesday.
"Strange and bizarre things happen to you with alarming frequency. You are the one with whom demons will stop and chat. Magic items with disturbing properties will find their way to you. The only talking dog on 20th-century Earth will come to you with his problems. Dimensional gates sealed for centuries will crack open just so that you can be bathed in the energies released...or perhaps the entities on the other side will invite you to tea. Nothing lethal will happen to you, at least not immediately, and occasionally some weirdness will be beneficial. But most of the time it will be terribly, terribly inconvenient."
— "Weirdness Magnet" disadvantage, GURPS
Advertisement:

For some reason, the character is always standing at the corner of Strange Street and Bizarre Boulevard, in the town of Uncanny Valley. They run into situations or creatures that most people don't even believe in, much less have to deal with on a regular basis. Through no fault of their own, they constantly suffer through the effects of the paranormal and supernatural. Alternatively, the character may not think of the weirdness about them as particularly strange; after all, this sort of thing happens to them all the time. However, if something starts getting surreal on the show, chances are, they're at the center of it.

Often seen in comedy, especially when the writers get lazy and don't even bother to Hand Wave their plots anymore. Also used egregiously in Sci-Fi and fantasy series, with the chain of weirdness catalyzing in the Pilot, and each specific occurrence resolved at the end of the episode. Bonus points if, at some point, one of the characters brings it up and asks, "Why does this kind of stuff keep happening to me/us?" or notes that that "ever since [the events of the pilot happened], you've been a magnet for the freaky", often resulting in I Just Want to Be Normal.

If the events surrounding the character are possible, just staggeringly unlikely, then they're a Coincidence Magnet. If they are related to mysteries they are a Mystery Magnet. The title is reserved for those who draw the outright impossible—involving monsters, aliens, magic, Psychic Powers, Time Travel, etc. Weirdness Magnets are also more likely to be explicitly noted by characters. If a Weirdness Magnet is the focus of external forces that causes things to happen around them, then they're a Cosmic Plaything. If there's something literally about the person that makes them attractive to the Supernatural, they're Supernaturally Delicious and Nutritious. If the Weirdness Magnet is a location rather than a person, it is either a City of Adventure or a town where nothing exciting ever happens. In anime, Tokyo is particularly vulnerable. In the US, New York is the place to go for excitement. In general, Earth tends to get more than its fair share of craziness. In any case, it may be justified by a Magnetic Plot Device.

Alternately, they may have a gift or power which draws attention, because Magic Is a Monster Magnet.

Some characters tend to be more prone to this than others: like the Unfazed Everyman, Cosmic Plaything, Unlikely Hero, and Recurring Extra. The Only Sane Man is often one of these as well. Often, it's because they have a Clingy MacGuffin, in which case these people consider themselves to be Blessed with Suck. If it goes on long enough, expect the character to start getting chummy with some very diverse "people", even picking up a Monster Roommate. This trope is one of the causes of the Superhero Paradox.

The original Trope Namer was the Blue Devil comic book published by DC in the 1980's, where the main character's status as a Weirdness Magnet is noticed (and explicitly named) within the series. It was later adopted and popularized by the GURPS RPG.

Not to be confused with Strange Attractor

.note Although Niles Caulder may see a correlation...