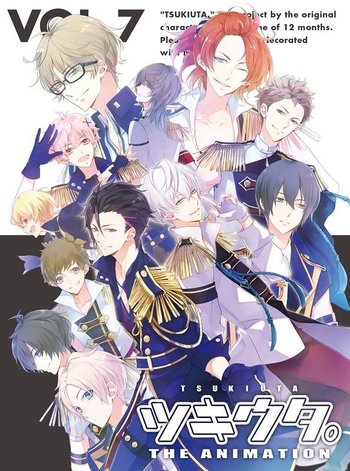 is a project under the fictional Tsukino Talent Productions agency, a group of Vocaloid and Niconico producers working together to produce songs for individual characters. Beginning in 2012, it consists of four idol units representing the months of the year, with the male half of the project being the main focus. The men came first in 2012, while the women debuted in 2014.

The groups are as follows:

For the most part, the franchise consists of albums and Drama CDs, each explaining the characters and their motivations more clearly. An anime about the male groups, Tsukiuta the Animation, aired in the Summer 2016 Anime season animated by Studio Pierrot, while a mobile Rhythm Game, Tsukino Paradise, debuted in 2017. A second anime season was announced at Animate Girls Festival 2018, this time focusing on the 2019 era of Tsukiuta and produced by Children's Playground Entertainment. This season would not air until Fall 2020 due to delays. The Tsukitsui Yonkoma manga began around the same time in 2016, and ran on the webcomic host Yuruyon.

The cast also performs separate concerts: Lunatic Live in 2017, Memorial Tour in February and March 2018, and Lunatic Live in Omiya in December 2018 (together with the cast of SQS). In contrast to the drama CDs and anime, the stage plays often feature fantasy AU stories with elaborate costumes. The final performances of each play are filmed for bluray.

The characters play minor roles and sometimes cameo in the other Tsukipro series, including Tsukipro the Animation as the sempai groups of all of the main characters in that adaptation.

Tropes applying to Tsukiuta the Animation: