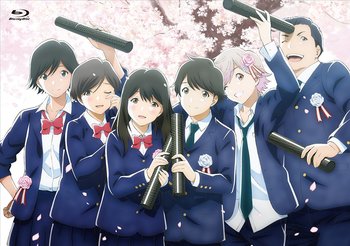 I think you're fine just the way you are.(*) Left to right: Aoi, Chinatsu, Akane, Kotaro, Roman, Daichi.
Who was it that translated "I love you" as "Isn't the moon beautiful tonight?"
— Kotaro Azumi
Advertisement:

Kotaro Azumi is a senior middle school student who enjoys books and hopes to become a novelist someday. Also attending his school is Akane Mizuno, a shy member of the track and field club. At the beginning of the school year they are put in the same classroom for the first time and begin noticing each other through glances. After they are both put in charge of the sports festival, they will discover they have more in common than they thought. They, and the people around them, will evolve through mutual understandings and feelings. As their final year of middle school progresses, the group will overcome their challenges to mature and become aware of changes in themselves in the process.

The series features characters that appear on the series but get further exposure in the after-credits shorts:

Tsuki ga Kirei (月がきれい, as the moon, so beautiful.) is a middle school romance anime produced by studio Feel. It premiered in April 6, 2017, for the Spring 2017 Anime season: it can be viewed legally with subs on Crunchyroll here

Not to be confused with Tsuki ga Kirei Desu Ne, an ongoing fantasy/romance manga by Hachi Itou.

Alternative Title(s): As The Moon So Beautiful