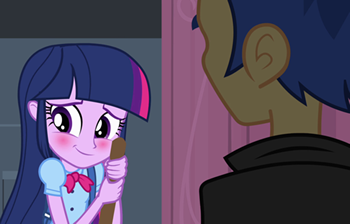 Love — even Puppy Love, perhaps especially Puppy Love — makes the young and innocent blush. Whether speaking of the Love Interest, realizing that you are the Love Interest, being caught studying the Love Interest (especially by the object of study themselves), declaring that She Is Not My Girlfriend, or actually talking to the person, expect the character to turn red, still more so if the Love Interest expresses affection or praise. Very young or innocent characters may evince this even when an attractive person seems to notice them, or when they witness other characters in love. Less innocent ones may be driven to it only by the Love Confession. Because it is out of control, the Tsundere and those Oblivious to Love may be betrayed by it.

People prone to the Luminescent Blush or Blush Stickers are bound to suffer these. The Celibate Hero is prone to it. An apparently hard-bitten character who evinces it is revealing a soft side to himself. Adolescents are particularly prone to revealing they are not as grown-up as they pose as. This may be accompanied by a giggle.

Very much Truth in Television, as the reaction is involuntary and triggered by emotion. Many people of both genders have felt or been told to have one of these in real life.

Contrast Gibberish of Love, which indicates more ineptness than innocence.

Despite under temporary identity amnesia, Adrien and Marinette still feel that they love each other; explaining they're blushing when their hands accidentally touch.

Despite under temporary identity amnesia, Adrien and Marinette still feel that they love each other; explaining they're blushing when their hands accidentally touch.