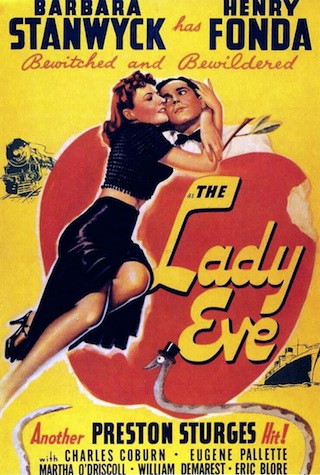 "You know you shouldn't draw to an inside straight."
— Colonel Harrington to his broken-hearted daughter
Advertisement:

The Lady Eve is a 1941 film written and directed by Preston Sturges, often considered to be one of the most iconic Screwball Comedy movies from the genre's golden age. It stars Barbara Stanwyck and Henry Fonda, with appearances by Charles Coburn, William Demarest, and Eugene Pallette.

On a cruise full of wealthy tourists, the conning Mr. Harrington (Coburn) and his daughter Jean (Stanwyck) look around for potential guests to trick with their poker games. When the ship stops at a port, a wealthy Ophidiologistnote Someone who studies snakes named Charles Pike (Fonda) boards after spending a year researching in the Amazon. Jean and her father make him their next target and Jean flirts her way into winning him over, which works almost instantly until Charles finds out through his assistant Jean's true intentions. Furious and heartbroken, Jean refuses to let Charlie go and, with the power of identity theft and cultural ignorance, disguises herself as Lady Eve Sidwich, the niece of the supposed Sir Alfred McGlennan Keith (Eric Blore).