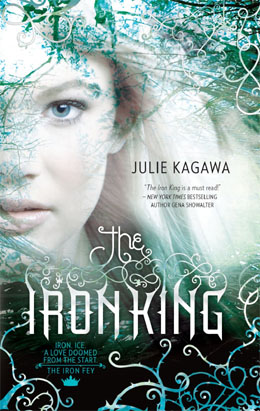 The Iron Fey is a series of Young Adult novels by Julie Kagawa, dealing with the misadventures of young Meghan Chase in Faeryland.

The Iron King (not to be confused with the tokusatsu show) is where our story starts. Meghan finds out that her father was not the insurance salesman she thought he was, but was instead Oberon, king of the Summer Court of the Fey. She also finds out that her best friend, Robbie Goodfell, is actually Robin Goodfellow, better known as Puck. She ventures to faery lands to rescue her brother, but finds herself caught up in the politics of the world, and is forced to fight against the iron court, a brand new court formed as human dreams begin to shift toward technology. Along the way, she meets Ash, the son of the Winter queen, whom she agrees to accompany in exchange for his help dealing with the iron court.

The next part of the series is the novella "Winter's Passage", which follows Ash and Meghan as he takes her to the winter court per their agreement, but along the way they are attacked by a creature sent by Oberon to "rescue" Meghan.

The Iron Daughter opens with Meghan a prisoner of the Winter Court, where she dreams of the Iron King she killed at the end of The Iron King. She feels betrayed by Ash, who must pretend not to care while they are in the court. The two are forced to leave when one of Ash's brothers steals the Scepter of the Seasons, which he intends to give to the new Iron King in exchange for power. Ash, Meghan and Puck go after it, with the help of Ironhorse, who tells them that the new king is a fraud. The group retrieve the scepter, but Ash and Meghan are banished to the Mortal realm.

Book 3, The Iron Queen, picks up where The Iron Daughter left off, as Meghan and Ash approach her human home. When they arrive, they find her home being attacked by iron fey under the orders of the false king. The two decide to flee to Leanansidhe, also called the Exile Queen, for shelter. Along the way, Glitch, a former lieutenant of the Iron King and current leader of the rebels against the false king, attempts to take them into custody for Meghan's protection, fearing that all would be lost if the false king captured her. While training to go after the false king, they discover that in addition to the Summer glamour she gained from her father, Meghan also has Iron glamour gained from killing the Iron King back in book 1. The three return to faery after Meghan and Ash's banishments are lifted, and Meghan takes her rightful place.

The fourth book, The Iron Knight, came out in November 2011. Said book should not be confused with Iron Knight