Our Souls Are Different 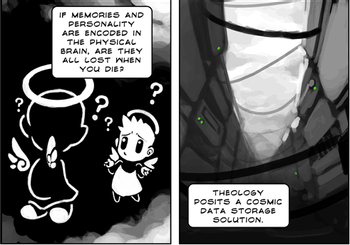 The Iron Giant: I die?
Hogarth Hughes: I don't know. You're made of metal, but you have feelings, and you think about things, and that means you have a soul. And souls don't die.
Giant: Soul?
Hogarth: Mom says it's something inside of all good things, and that it goes on forever and ever.
— The Iron Giant
Advertisement:

How does the mind work? Is it contained entirely in the brain, or is there something more? Whichever it is, the "something more" is generally referred to as a soul. However, as something that is by definition intangible, there hasn't been much agreement on what it is that a soul actually does. Is it essential for life, or can a person live on without it? What exactly does it give you - life, or wisdom, or will, or morality? Does it have weight? What happens if it's stolen or sold? Is it an Energy Being? Does it taste like strawberries or chocolate?

Authors of fiction explore some possibilities on how the nature of a soul, and its absence, affects a person.

Here are some common side effects of losing your soul:

Other aspects of this:

See also Heart Trauma, where one's literal heart is synonymous with one's soul. If there's more than a one-piece soul inside of a person, it is likely that a whole Soul Anatomy is in there. Sometimes, a soul is a Piece Of God. See also Brain in a Jar, which presents a more scientific variation in which the brain either is the self (with no spiritual aspect) or somehow contains the soul.

Compare Our Spirits Are Different.