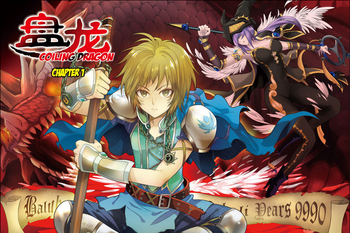 Image from the graphic adaption, where the artist took an Artistic License and made an old man into a buxom woman
Advertisement:

Coiling Dragon, aka Panlong, is a Web Serial Novel written by wuxia author I Eat Tomatoes and has been completely translated into English by Ren Wo Xing

. A manhua adaptation also exists for the work.

Empires rise and fall on the Yulan Continent. Saints, immortal beings of unimaginable power, battle using spells and swords, leaving swathes of destruction in their wake. Magical beasts rule the mountains, where the brave - or the foolish - go to test their strength. Even the mighty can fall, feasted on by those stronger. The strong live like royalty; the weak strive to survive another day.

This is the world which Linley is born into. Raised in the small town of Wushan, Linley is a scion of the Baruch clan, the clan of the once-legendary Warriors. Their fame once shook the world, but the clan is now so decrepit that even the heirlooms of the clan have been sold off. Tasked with reclaiming the lost glory of his clan, Linley will go through countless trials and tribulations, making powerful friends but also deadly enemies. Come witness a new legend in the making.

The Legend of Linley Baruch.