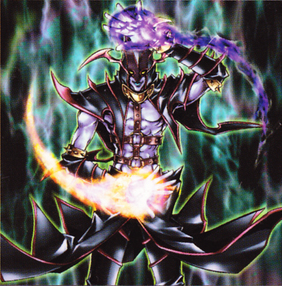 Darkness and Light — two great tastes that go great together!
"Light belongs to shadow, shadow to light
Chasing one another to the very end"
— Bonnie Pink, Tales of Vesperia, "Ring a Bell" (translated)
Advertisement:

The Ideal Hero is the champion of all that is good. Thus, his power will be that of light, he will dress in white or bright primary colors, like blue and red, and he will rarely take proactive action against the villain, preferring to play defensively and protect and defend the innocent. He will also champion the causes of love, courage, and hope. Only natural, such good powers could never be used for evil!

Of course, sometimes you have an Anti-Hero, the guy who wields the power of darkness, powers himself on negative emotions, and probably has an angsty past. He probably dresses in all black, too. In extreme cases, the Dark Hero would like nothing, nothing better than to wrap his hands around his archnemesis' throat and strangle the life out of him. Think Sabata, Raven, and Batman.

But our guy, the Yin-Yang Bomb user, doesn't care about all those things. He uses both. Not just that, but often, he will combine them into something higher and invariably ridiculously more powerful. Dark and light are not evil and good; they appear together a lot for good reasons. To resolve the storyline or beat the boss, the hero must grab the reins of both and wield them in a harmony of fusion.

Yin-Yang Bombers can use other diametrically opposed forces as alternatives to Light and Dark, such as Order and Chaos, Harmony and Discipline, Ice and Fire, or Love and Hatred.

Yet another variation is the result of a character who, whether from insanity, ignorance, indifference to the rules, or sheer desperation, combines two forces which every rule in the book says should not be combined. In the event that they survive this, they may thereafter retain this ability to harness the two forces at will.

Sometimes overlaps with Energy Donation or All Your Powers Combined. Naturally, good buddies with Dark Is Not Evil, or, in the case that the villain uses this, with Light Is Not Good. The result is frequently Non-Elemental, ignoring elemental resistances. Or, as demonstrated in a few cases, the effect may be able to completely destroy something and recreate it (usually as a child). Sometimes, an Enemy Mine with a villain may result in them combining their powers to do this. Contrast Mutually Exclusive Magic.

See also Yin-Yang Clash. As described in said page, yin and yang are actually 2 halves of the same thing that, when they "clash", become this instead, i.e a state where one harmonizes the yin and yang, called "taijitu" or "taikyoku". This is a subtrope of Ability Mixing, and by extension a subtrope of Meta Power.

Jun came up with a defensive technique for Wu & Wei, using Wu's freeze breath to make a ring of ice around them and Wei's fire breath to superheat the top layer of said ice into a blast of steam.

Jun came up with a defensive technique for Wu & Wei, using Wu's freeze breath to make a ring of ice around them and Wei's fire breath to superheat the top layer of said ice into a blast of steam.