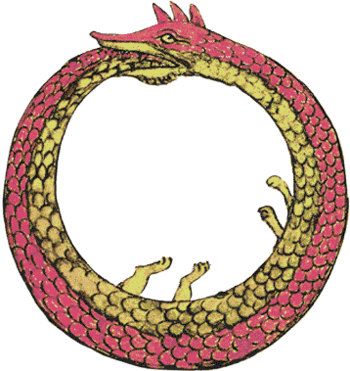 Dating back to Ancient Egypt, the Ouroboros is a symbol of eternity and the cyclical nature of time and the universe. The fact that the serpent is eating itself is also indicative of the idea of self-consumption in the way we live. Sometimes it may even be two serpents each eating the other's tail, taking on similarities with the Yin Yang symbol. Another, more modern common variation is for the snake or snakes to have an additional knot which forms the infinity symbol, ∞.

The Motif gains a lot of a secondary tier of association with alchemy and Time Travel. Note the connection to The Phoenix and also the serpent as the shedder of skin and rejuvenator which acts much like The Phoenix motif.

Sometimes, the ouroboros is present as a physical being in its own right, and, in some versions, the serpent encircles the world or the Tree of Life, and is tied to its fate. Most often, however, the ouroboros appears as a symbol or motif instead of a living creature.