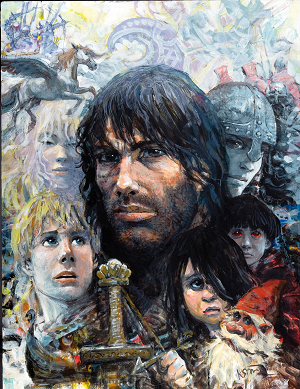 Thorgal is a Franco-Belgian comic series written by Van Hamme and illustrated by Rosinski, started in 1977 and was originally published in serial form by the magazine Tintin and from 1980 on in hardcover volumes by Le Lombard.

The series, which combines the classic Heroic Fantasy with elements of Science Fiction follows the adventures of the eponymous hero Thorgal, "The Child of the Stars," an orphan discovered by Vikings in a space capsule during a tempest and raised among them.

In the first album of the series (The Betrayed Sorceress), Thorgal is banished and sentenced to death by Gandalf-the-Mad (no, not that Gandalf ), king of the Vikings of the North, who despises him as a "bastard", and opposes the love between his daughter Aaricia and Thorgal. Rescued by a mysterious woman called Slive, he must accept to serve her for one year. It is later revealed (in The Island Of the Frozen Seas) that she is a survivor of a race of Ancient Astronauts (actually Atlanteans who fled from Earth by the times of the cataclysm) whose ship crashed in the North Pole several years ago. Thorgal is revealed to be the last descendant of the "People of the Stars".

Although Thorgal's only wish is to settle and live peacefully with his wife, Aaricia, he is constantly faced with natural or supernatural foes from ruthless adventurers to monsters of Norse Mythology who threaten his family and friends.