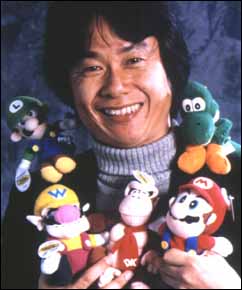 Shiggy, Shiggy, Shiggy, can't you see? Sometimes your games just hypnotize me.
What if everything that you see is more than what you see? The person next to you is a warrior and the space that appears empty is a door to another world? What if something appears that shouldn't? You either dismiss it or accept that there is more to the world than you think. Perhaps it is really a doorway, and if you choose to go inside, you'll find many unexpected things.
Advertisement:
Any new media or industry that grows rapidly is going to be criticized. That's just because the older, more established media have been around, and a lot of adults can be very conservative. They may not have an open mind to new things that weren't around when they were growing up, and are replacing the things they grew up with... over the years I've seen this standard image of a child playing a video game in which the child is alone in a darkened room, with his face very close to the TV, with the light of the TV reflecting off his face, holding the controller and just staring at the TV. I'd really like to be able to change that image of video games into something that's a little more positive.

Shigeru Miyamoto (born November 16, 1952) is a video game developer for the Nintendo company. He is credited with the creation of a few of gaming's most iconic franchises, including Super Mario Bros., The Legend of Zelda, Donkey Kong, and Star Fox. His chief video game character, Mario ("Jumpman" when Donkey Kong was first released), is the mascot of the company.

After being influenced by the creations of Pac-Man and Space Invaders, he began his career at Nintendo through his father's connections, becoming the company's first artist. As this was during the point where the company was focusing on entering the video game market, he was in charge of creating the art for all of Nintendo's early arcade cabinets, including Sheriff and Radar Scope. Radar Scope's failure in the Western market left so many units unsold that Nintendo was on the verge of financial collapse. When President Yamauchi thought to convert the unsold units into an entirely new game, he tasked Miyamoto with the project under Gunpei Yokoi's supervision.

His creation of the 1981 arcade game Donkey Kong was one of the first times video games would have a story that preceded development of the game itself. Since then, he's been so busy with so many fingers in so many pies over the years that competitors and their fans admit that he has given more to the video game industry than just about everyone else, possibly combined. For a long while, he was head of Nintendo EAD, which is in charge of almost all of its first-party titles and he's had a hand in the development in the Wii and 3DS. Currently, he is the Creative Fellow of Nintendo, having been appointed to the position following company president Satoru Iwata's death in 2015, formally leaving his position as head of EAD as a result. Despite this, he is still involved with many of their projects, including Star Fox, Pikmin, and other games.

He also mentored Masahiro Sakurai, the creator of Kirby and Super Smash Bros., and Satoshi Tajiri, the creator of Pokémon. Incidentally, he's the one who suggested the dual versions of Pokémon games, as a way to facilitate trading Pokémon among players.

Once, he was issued a gag order forbidding him from revealing anything he does in his off-time, as he frequently bases his games on his hobbies and Nintendo wants no information leaked about possible future franchises. He has a hobby in measuring objects, carrying a measuring tape on his person at all times.

He's also been awarded a knighthood by the French Ministry of Culture, as well as the Spanish Prince of Asturias Award. As well as the BAFTA Fellowship. They must really like Mario.

Do not confuse with that famed Sengoku swordsman.

Franchises and standalone games created, co-created, and/or produced by Miyamoto:

...And I just love Zelda and DK
Guess that's why they broke and you're so paid.