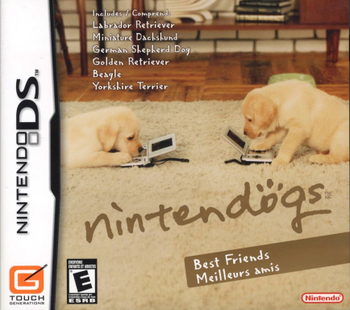 Unfortunately not playable for species without opposable thumbs.
Back in 2005, Nintendogs was the early Killer App of the Nintendo DS, especially popular with children and young women. You get to look after up to three puppies which you can feed, walk, play with and bathe. You can teach it to do tricks in response to your real voice, using the DS microphone, and enter it into contests to win virtual prizes.
Advertisement:

Unlike Tamagotchi and similar virtual pets, a Nintendog will not die, get sick, or even age beyond puppyhood. Even if the game is neglected for an extended period of time, the worst that happens is that the dog may temporarily "run away".

Nintendogs + Cats was eventually released in 2011 for the Nintendo 3DS. As you may have guessed, it adds kittens as virtual pets you can keep.