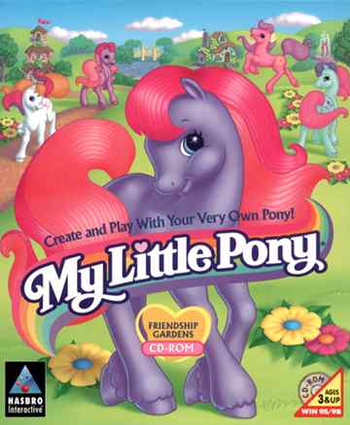 Create and play with your very own pony!
Advertisement:

My Little Pony: Friendship Gardens is a PC Video Game about My Little Pony. Released during the Generation 2 era (1997-2003), it's a Raising Sim game—you raise and care for your own Little Pony. Gameplay is divided between the farm, where you care for your pony, and Pony Village, where you can play games. Along the way, you can teach her to jump fences, play games with other Ponies, and eventually cross the rainbow to Ponyland. But don't let her rainbow fade away!

This game is also notable for featuring the Gen 2 ponies and giving them personalities (G2 is the only one to never get any Animated Adaptation). Sundance is an explorer, Morning Glory likes games, Sweet Berry likes to bake, Ivy's a glamour girl, and Lightheart likes playing jokes.