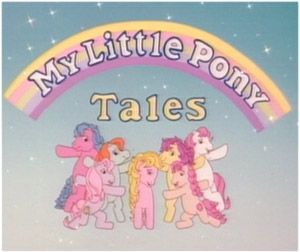 "Something is starting, right now, something is starting, oh wow..."
Released for TV in the early nineties, My Little Pony Tales is the second TV series based on the toyline, My Little Pony, by Hasbro. Unlike the previous incarnation My Little Pony 'n' Friends, which was a fantasy/adventure series, it was decided to give the ponies a Slice of Life angle, and removed most of the fantasy elements. As a result, the only breed of pony in this series are Earth Ponies. Your mileage will vary on whether this was a good thing or not. The show was set in an unnamed suburb, somewhere in Ponyland.
Advertisement:

The show centered on seven pony girls named Starlight, Sweetheart, Melody, Bright Eyes, Patch, Clover, and Bon Bon. However, the show is notable for averting the Improbably Female Cast that My Little Pony normally prescribes to by introducing three male main ponies: Ace, Teddy, and Lancer. The show focused on their daily lives and how they dealt with things like stage fright, dating, personal responsibility, the environment, pets, cultural differences, school, trust, bullies, and other things normal kids deal with. This was the first of three attempts to make a Slice of Life style My Little Pony show. The producers did this to try to reach their core demographic, girls, who watched the original series but would be old enough by then to worry about any of the above issues the show tackled.

Much like its predecessor, My Little Pony 'n Friends, the series was comprised of quarter hour shorts, but unlike before, shared its running time with no other properties. The series ran for twenty-six episodes told over the course of thirteen airings in 1992.