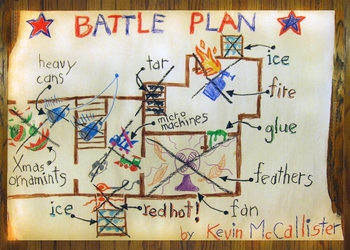 And wacky antics ensued!
"What's that movie that everybody was trying to rip off at that point in time? Oh! Home Alone! And I just so happen to have the Home Alone ripoff checklist right here!"
— The Nostalgia Critic reviewing

Named after and popularized by (but not started by) Home Alone, "Home Alone" Antics are an unusually specific trope. At its most well-known form, a kid sets traps in or around a house, and bad guys who are after the kid (or the house, or something inside the house) end up getting hurt by the traps.

There can be variations on the concept. It doesn't have to be a kid who sets the traps or tricks the bad guys — in fact, in one movie, it was a dog. The traps don't always need to be "set"; they can be part of the architecture/environment. However, the one required aspect is dumb/goofy villains being tricked into falling for the traps in a comedic manner.

This is the Lighter and Softer version of Protect This House, and a variant of the Humiliation Conga. A subtrope of Slapstick and by extension, "Die Hard" on an X. Related to Home Field Advantage, as the kid is probably setting up the traps in his own home or some place he's more familiar with than his opponents. For more serious takes on the trope outside kids or their homes, see Trap Master.