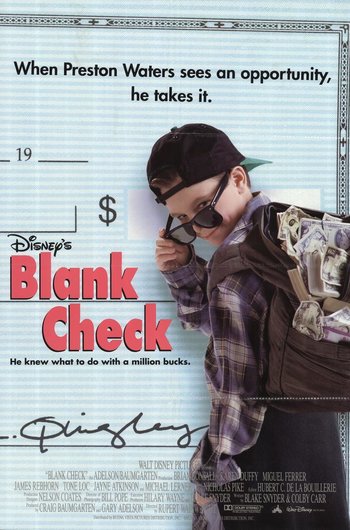 The story begins when bank robber Carl Quigley escapes from jail. Soon after his prison break, Quigley enters a warehouse and recovers $1,000,000 he had hidden there sometime before his arrest. After that introduction the plot switches to Preston Waters, a 12-year-old boy tormented by his brothers and ignored by his hyper-capitalist dad. He goes to a bank to open an account but gets laughed out, while at the same time Quigley is exchanging the bills through a corrupt bank employee using checks. After the meeting, Quigley runs over Preston's bicycle while he was riding it in the bank's parking lot.

Pressed for time as he sees a police car patrolling the area, Quigley gives Preston a signed blank check and tells him to give it to his dad so they can buy him a new bike. Instead, Preston writes himself a check for $1,000,000, cashes it with the inadvertent help of the corrupt bank employee and uses the money to go on a spending spree and romance a 30-year-old bank teller — until Quigley finds out what has been done and comes after him.

Not to be confused with the Art James Game Show of the same name that ran on NBC for 26 weeks in 1975, or the movie podcast Blank Check with Griffin & David, which eventually did cover their namesake for one of its episodes.

Preston gets some stuff for his mansion.

Preston gets some stuff for his mansion.