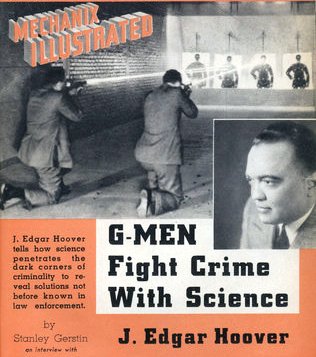 The right man in the wrong place can make all the difference in the world.
Angela: God, you people work just like the mob! There’s no difference!
FBI Agent: Oh, there’s a big difference, Mrs. de Marco. The mob is run by murdering, thieving, lying, cheating psychopaths. We work for the President of the United States.
— Married to the Mob
Advertisement:

An agent of the Federal Bureau of Investigation or one of its fictional counterparts.

The FBI is the investigative branch of the United States of America's Department of Justice. See American Law Enforcement for information about the agency. This is about the agents in fiction.

From the late 1920s through the 1950s; "G-Men" were seen in fiction as incorruptible forces for law and America, with very rare exceptions. However, J. Edgar Hoover's suspicion of the politics and motivations of prominent civil rights activists, and growing paranoia about the social changes in America, caused the FBI's activities to become increasingly out of step with the times (serious legal violations occurred in spying on activists). Mishandled cases and other scandals, some decades old, were talked about more publicly. After Hoover died in 1972, a law previously passed to limit the tenure of FBI directors came into effect. Scurrilous rumors of J. Edgar's sexual peccadillos or connection to organized crime figures got a lot more play once he couldn't sic his agents on those reporting them.

Media portrayals of the FBI since then have generally depicted a flawed but usually well-meaning organization, some of whose agents are corrupt or evil. Works of fiction will often use a No Celebrities Were Harmed version of the FBI and Hoover. They have a better public image than the CIA, of course, Hoover's machinations notwithstanding.

FBI agents during the majority of the Hoover period were Always Male (there had been female agents before he took office, but he felt that women were unsuited for the work) and agents of color were rare to non-existent, which made working in certain communities, especially infiltration of them, difficult. Indeed, during the Hoover years the FBI rarely had its agents infiltrate the organizations they investigated, preferring to recruit paid informants who were already on the inside. Special agents must have a 4-year ("bachelor's") college degree, with a preference given to Law and Accounting.

Sometimes overlaps with The Men in Black. If the FBI isn't the only law enforcement agency involved, there may be Jurisdiction Friction. For agents of other government agencies without their own entry, including fictional ones, see Government Agency of Fiction.

Works that feature the FBI or its agents include: