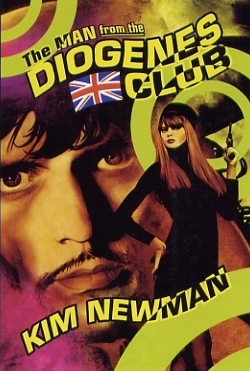 A series of short stories by Kim Newman.
Advertisement:

First, a paragraph of historical context and disambiguation: The Diogenes Club was created by Arthur Conan Doyle for a Sherlock Holmes story, in which it was an eccentric gentleman's club catering to gentlemen who wanted access to the facilities of a club but didn't get on well with other people; Holmes's brother Mycroft was a member. The movie The Private Life of Sherlock Holmes proposed that the Diogenes was a front for, and Mycroft Holmes a senior official of, the British secret servicenote  This expands on a line in The Bruce-Partington Plans where Sherlock remarks that while Mycroft works for the government, "Occasionally, he is the British Government". Kim Newman used this interpretation in his novel Anno Dracula, in which an agent of the Diogenes Club investigates Jack the Ripper and discovers a conspiracy leading to the highest levels of government.

The main sequence of stories range from Victorian Britain, when Mycroft Holmes presided over the Club in its familiar form, to The '80s, when dark behind-the-scenes forces used the British government's enthusiasm for privatization to have the Club officially dismantled and replaced by a tame band of paranormal investigators with electronic detectors and a silly acronym. Each story is a stylistic pastiche of the investigator of the unknown and/or secret agent fiction of the period in which it's set, with much Lampshade Hanging and other playing with tropes. (And then there's The Serial Murders, featuring a Show Within a Show soap opera, which explicitly lampshades a whole new set of genre tropes.)

The period that gets the most attention is The '70s, when Richard Jeperson, psychic detective and glam fashion enthusiast, was the Club's best agent, ably assisted by the elegant Vanessa and the down-to-earth Fred Regent. These stories homage British TV series such as The Avengers (1960s), Adam Adamant Lives!, and Jason King (to whom Richard is explicitly compared at least once — discussing who will play a fictional version of him, he mentions that "the name Peter Wyngarde keeps coming up.")

Other featured periods include Victorian Britain, with Charles Beauregard and Kate Reed (alternate versions of whom featured in Anno Dracula); and the Twenties, Thirties, and Forties, with Edwin Winthrop and Catriona Kaye (who had previously appeared as supporting characters in the nominally standalone novel Jago, which also introduced the paranormal investigators with the silly acronym).

If the Richard Jeperson stories are episodes of a 1970s TV show, Swellhead is the inevitable 21st-century backdoor-pilot revival telemovie, in which Richard is called out of retirement to face a problem only he can solve, picks up a new able assistant, and decides it's past time he resumed his adventures.

...and that's where the series ends. For now.

, the Diogenes universe also (loosely) encompasses other entries in his oeuvre including Angels of Music and The Hound of the D'Urbervilles.

Stories in this series with their own trope pages include:

Other stories in this series provide examples of: