Literature / Dinosaurs: The Most Complete, Up-to-Date Encyclopedia for Dinosaur Lovers of All Ages 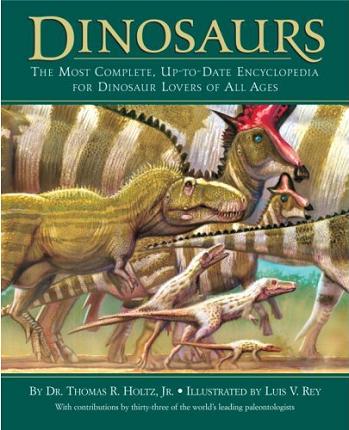 A 2007 encyclopedia on dinosaurs created by the combined might of paleontologist Dr. Thomas R. Holtz, Jr.

and famednote though some would say infamed paleoartist Luis Rey

. Unlike your average dino-book, this one doesn't merely cover the most well-known genera and calls it a day — the author instead divided it into 42 chapters, each revolving around a major theme, like geology, fossilization, the Mesozoic periods, but the bulk of the written material is dedicated to thoroughly detailing each of the branches on the dinosaur family tree. True to the title, this means birds get a chapter of their own, while pterosaurs and marine reptiles don't.

Written in a casual language both young and adult paleo-nerds will find readable and enjoyable, this volume is seen as the "Dinosaur Bible" by many enthusiasts of the subject, for its sheer completeness and scienciness. And for the colorful pictures supplied by one of today's top dino artists. The text is punctuated by short essays written by the world's most famous paleontologists, giving a deeper insight into the dinosaur age and the work that goes into deciphering it.

Sadly, it's become pretty outdated and incomplete by now... paleontology is, ironically, a science that evolves in a faster pace than most people can keep up with... but most of it still holds up well, and the basic scientific thought processes which the book employs and stresses so much are as solid as ever.

for a load of supplementary material that touches upon nearly every little detail in the book that has proven incorrect or obsolete. A web address for the site is also given in the book.