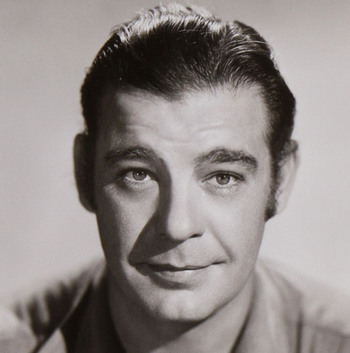 I saw Lon Chaney Junior walking with the Queen ...
"Nothing is more natural to me than horror."
Advertisement:

Chaney was born in Oklahoma City, Oklahoma Territory, the son of silent film star Lon Chaney. After his parents' marriage ended in divorce, young Creighton lived in various homes and boarding schools until his father remarried and was able to provide a stable home. Creighton worked hard to get out from his father's shadow growing up, while the elder Chaney discouraged him from entering show business.

Obviously, that didn't work out too well, as after the elder Chaney's death his son started acting in films, beginning with a bit part in the 1932 film Girl Crazy. He appeared in films under his true name until 1935, when he began to be billed as Lon Chaney Jr. From 1942 onward he was bill as just "Lon Chaney", though the "Jr." was often added to distinguish him from his father. His first starring role was as Lennie Small in the 1939 film version of Of Mice and Men, but it was not until his role in One Million B.C. that Chaney's true calling as a character actor became clear. He was then cast in Man-Made Monster, in a performance that led to an offer to star in The Wolf Man (1941), a role that would lead to him being typecast as a horror actor for the rest of his life. In addition to playing cinema's most famous werewolf, he would also go on to play Dracula, Frankenstein's Monster, and the Mummy, which means he probably played more iconic monsters than any other actor.

Despite this, he carved out a secondary niche as a supporting actor and villain in crime films and westerns, and starred in a series of radio shows. After making 30 films for Universal, he left the studio and worked primarily as a character actor.

Chaney died of heart failure at age 67, and his body was donated to science. He was honored by appearing as the Wolf Man on one of a series of postage stamps depicting movie monsters.

Among many horror fans, Chaney is half-jokingly known as "monster royalty". In a meaningful quirk of fate, his father had the distinction of starring in the very first Universal Horror film The Hunchback of Notre Dame in 1923, as well as its 1925 follow-up The Phantom of the Opera—arguably making him the original Universal monster. Conversely, The Wolf Man was one of the last films in Universal's "classic" era of monster movies, and the Wolf Man himself was the studio's last new recurring character—arguably making Lon Chaney Jr. the last Universal monster (unless you count the Creature from the Black Lagoon). Now that's one hell of a family legacy.