Literature / The Hound of the D'Urbervilles 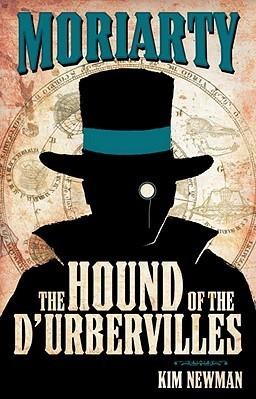 Professor Moriarty: The Hound of the D'Urbervilles is a short story collection by Kim Newman. It purports to be the memoirs of Colonel Sebastian Moran, trusted subordinate to Sherlock Holmes's favourite criminal mastermind Professor Moriarty, from the day of their first meeting to that day of reckoning by the Reichenbach Falls. Moriarty and Moran are presented as a dark mirror of Holmes and his assistant/chronicler Dr Watson, living in similar circumstances and having adventures that echo the detective's famous cases (the title story being an obvious example). As is usual for Kim Newman, the stories feature guest appearances by many other fictional characters (the eponymous story again being an obvious example).

Some of the stories have been previously published, including "A Shambles in Belgravia

". Others, including the final story, are new to this collection.

The version of Irene Adler featured in this book also appears in Newman's Angels of Music. Newman has indicated that both are loosely set in the same shared universe as his earlier Diogenes Club series.