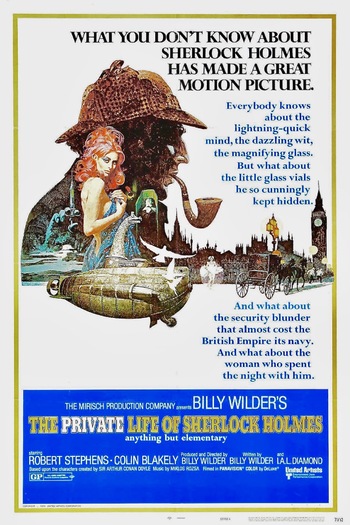 "We all have occasional failures. Fortunately, Dr. Watson never writes about mine."
— Sherlock Holmes
Advertisement:

A 1970 film by Billy Wilder, which asks the question: We all know about how successful Sherlock Holmes is at solving mysteries, but what about his failures? His secrets? Those things he wouldn't want Dr. Watson to reveal to the world?

The film is essentially split into two stories, one longer than the other: in the first, Holmes (Robert Stephens) is approached by a beautiful Russian dancer with an unorthodox offer to make to him; in the second, he and Watson (Colin Blakely) are drawn into a conspiracy at the highest levels of government after a woman who was fished naked out of the Thames finds herself on the doorstep of 221B Baker Street. In both cases, the outcome is something that Holmes would rather not be reminded of...