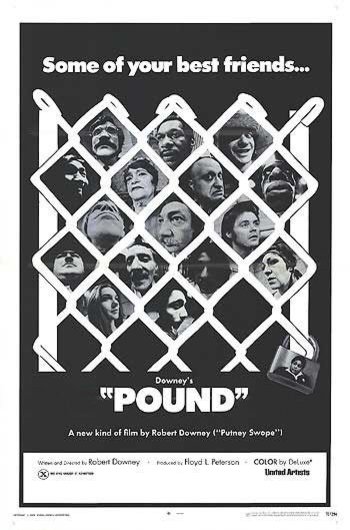 Pound is a 1970 film directed by Robert Downey Sr. (Putney Swope). It is best remembered today for being the acting debut of the director's five-year-old son.

The film takes place in a city dog pound as the animals (who are mainly dogs, but there's also a Siamese cat and a misplaced penguin there, too!) await their fate of being put down, but there is a catch: the creatures are portrayed by human actors (for instance, a bald guy in a poncho plays a Mexican Hairless; the Siamese cat is an Asian; the penguin, or "fowl" as the others call him, wears a tuxedo; the Boxer is a boxer, The Greyhound is dressed like a marathon runner, and so forth). As they await their impending deaths, they reminisce about life, attempt to escape/get adopted, or act out their wildest fantasies. Meanwhile, there is also a subplot involving a serial killer known as the Honky Killer.