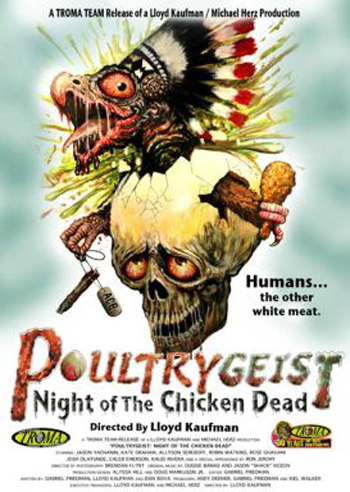 Arbie and Wendy just finished high school. They celebrate it by having sex on a burial ground of a local Tromahawk tribe, and during the act they promise that while Wendy is leaving town to study, they will stay true to each other. A year later, Arbie meets Wendy again, on a protest of the American Chicken Bunker fast-food net's intrusions against rich cultural history of the area and their slaughter of millions of innocent chickens. But alas for Arbie — in the meantime, she became a "left-wing lipstick lesbian liberal." In disgust over it, and to spite his ex-girlfriend, Arbie gets a job at the American Chicken Bunker. One problem: it's built on that Indian burial ground, as Arbie finds out... in song.

It's a Troma B-Movie, and it says all.