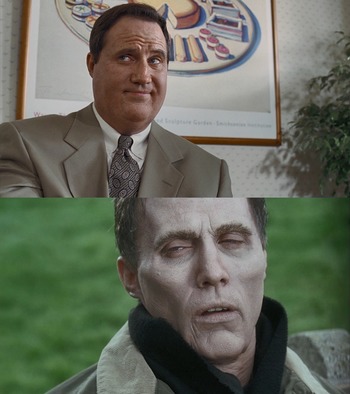 Gypsy Curse: The best weight loss program on the market! Warning Side-Effects Include... constant hunger, inability to retain weight, muscle loss, and death.
Sam O'Nella: Which makes me think; we should start a radical new fad diet where we just get people to mummify parts of their body. Like,
Stick Figure #1: "Jenny! Guess what? I just lost thirty pounds in five days!"
Stick Figure #2: "Wow, holy heck, how did you do that?"
Stick Figure #1: (lifts up dress) "They call it "The Egyptian Cleanse"."
— Sam O'Nella Academy, Dead Body Hijinks (part 1)

Maybe a character doesn't like his current shape and decides he's going to drop those pesky pounds if it kills him. Maybe he meets an unusual stranger on the street with slimming abilities. The point is, he loses weight (or at least takes steps to do so).

And everything goes straight downhill.

This trope is for works in which weight loss goes horribly wrong (or, even worse, horribly right). Maybe the characters lose too much weight and are in danger of disappearing altogether. Maybe they unwittingly sign themselves up for a weight-loss service with overly restrictive (read: lethal) penalties. Maybe the diet is magical and requires the sacrificing of children. Expect many examples to involve tapeworms, parasites which are known to cause this to people in real life. Really nasty examples may overlap with Body Horror, and self-inflicted magical ones might cross over with Be Careful What You Wish For.

Compare Fashion Hurts, for other ways in which the effort to maintain appearance can be painful and/or harmful, and Dead Weight and Fattening the Victim for other cases in which weight is associated with horror.

This trope appears in the following works: