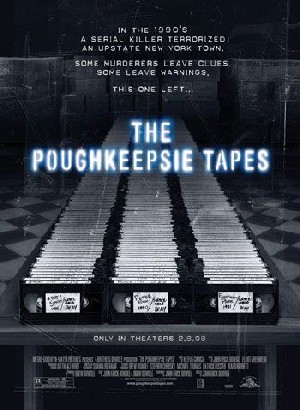 Filmed in a documentary style complete with Jitter Cam, The Poughkeepsie Tapes is a movie that is best seen with the lights on.

It chronicles the (fortunately fictional) spree of killings in Poughkeepsie, New York, that are all videotaped by the killer, who comes to be known as the Water Street Butcher. Hilarity, Gorn, gambits, terror, and ham ensues.

The film was made during 2008 but never got a theatrical release, though a rough-cut of the film has been leaked online and is screened at film festivals. After years of being in limbo, it finally saw a home video release from Shout! Factory in October 2017, being released on Blu-Ray and DVD under their Scream Factory label.