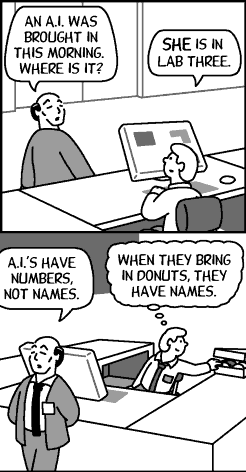 With numbers it's easier to commit mass murder for profit.
John: Don't kill him!
Sarah: "It", John. Not "him", "it".
— Terminator 2: Judgment Day (Extended Cut)
Advertisement:

As You Know, in the English language, pronouns are divided into "he", "she" and the singular "they" for humans and "it" for inanimate objects and wild animals.note though animals may also be referred to with gendered pronouns. Referring to a person as "it" is usually incredibly rude, as it's considered tantamount to denying they are a real person. (Well, much of the time. "It", as can be seen by its usage with animals, used to be for various non-human entities, entities which are hard to classify as male or female, people who prefer the "it" pronoun, or entities of which you are unsure of. Nowadays, it's mainly only preserved in select sentences, such as "Who is it?")

This trope is when a character is referred to as "it" in fiction. Perhaps the person who is referring to the character is a fantastic racist. Otherwise, it may refer to an Eldritch Abomination, which indicates that the being is too inhuman to empathize with, despite its intelligence. Perhaps the person in question is of undetermined gender or even just doesn't have one. The worst victims of this trope are probably Artificial Humans and Ridiculously Human Robots. Also used to demonstrate a character's prejudice against a transgender character; sadly, this is Truth in Television as well.

The trope does not exist in most other languages, at least not in the same way. Arabic and many European languages only have translations for "he" and "she". Others like German and Russian do have what can be called "it", but - unlike English - kept the original usage of essentially "miscellaneous nouns/entities". Yet others like Hindi and Turkish use the same pronouns for humans and everything else and do not have gendered pronouns either; the same is true in spoken Chinese, but not in written Chinese.

Recently, societal changes — at least in North America and Europe — have seen a growing acceptance of the idea that people should be referred to using the pronouns of the gender they identify as, making this trope retroactively seem even worse in cases where the subject clearly identifies as male or female. Although some nonbinary people do favor "it" as a pronoun, singular "they" is the most commonly accepted gender-neutral pronoun, and the best alternative to "it" when referring to humans, and Just for Fun there is also the (very) archaic hīe (pronounced like "hue") for plural "it", though good luck using hīe and have anyone understand you.

Incidentally, traditionally "he" could be a gender-neutral pronoun as well as a masculine one, but again this is now considered outdated. "One" is also sometimes used (as in "One does not simply Walk into Mordor") but isn't universal across the Anglosphere; is often considered in British English to be extremely archaic, upper-class and pretentious, and can be awkward when the speaker is referring to a specific person, especially if that person is standing right there, since believe that "one" can only be used when you're referring to a non-specific person.

Sub trope to Dehumanization, Dehumanizing Insult and Expository Pronoun. Compare What Measure Is a Non-Human?, Do Androids Dream?, Clones Are People, Too, Pronoun Trouble, and Of the People.

Alternative Title(s): It Is Dehumanising