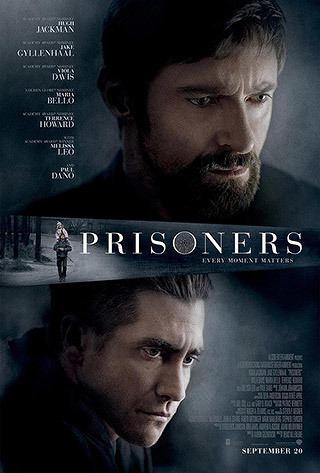 "Pray for the best, prepare for the worst."
Advertisement:

Prisoners is a 2013 American mystery thriller film directed by Denis Villeneuve from a screenplay written by Aaron Guzikowski. The film stars Hugh Jackman, Jake Gyllenhaal, Viola Davis, Terrence Howard, and Paul Dano. It is Villeneuve's first predominantly English-language feature (his prior ones being mainly in French), and — par for the course for the director — is incredibly dark.

The film revolves around two close families in Pennsylvania as they meet to celebrate Thanksgiving. After dinner, the families realize that both of their youngest daughters have vanished without a trace. As minutes turn to hours, panic sets in — alongside the feeling that the little girls have been abducted.

The police begin a search, led by a detective named Loki (Gyllenhaal), but as leads build with no results in sight, one of the families' fathers, Keller Dover (Jackman), decides to take matters into his own hands. Just how far will he go to protect his family, and just how horrible is the truth behind the girls' disappearance?

Prisoners was well-received, particularly for its performances and cinematography - it got cinematographer Roger Deakins his twelfth Best Cinematography nomination at the 86th Academy Awards.