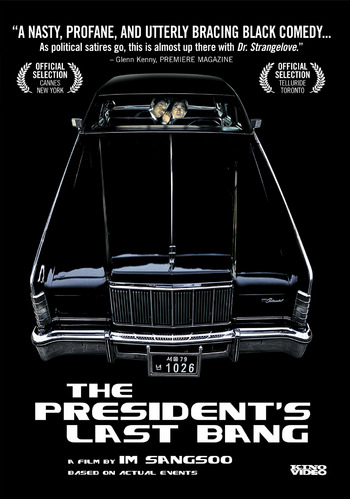 Well there's something waiting for him in the end.
Advertisement:

The President's Last Bang is a 2005 Black Comedy film from South Korea, directed by Im Sang-soo. It is a satirical dramatization of the bizarre Real Life events surrounding the 1979 assassination

At the time of his murder in 1979 President Park had been the ruler of South Korea for 18 years. Since 1972 he had been dictator in all but name, having rammed through a new Korean constitution that made him president-for-life. President Park is a decadent lecher who cavorts with prostitutes and other pretty young women brought to him by his security forces. (The movie does not mention that Park had been left a widower when his wife was killed by a North Korean bullet meant for him in 1974.) When he is not fondling nubile women or getting drunk with his buddies, President Park is demanding a more vigorous crackdown on the unrest and political protests then roiling South Korea. The person expected to crush the protests and crack down on opposition is Korean Central Intelligence Agency (KCIA) director Kim Jae-kyu. Kim loathes President Park, as well as Chief Bodyguard Cha, head of the president's security detail, who is a rival to Kim and is discrediting him to Park.

On the night of October 26, 1979, President Park goes to a KCIA safe house at Seoul for a party. Two women are brought in to entertain the president and provide breast pillows for his head: pop singer Shim Soo-bong and random university student Shin Jae-soon. At the party, Cha and Park go a little too far with their insults and mockery of Kim Jae-kyu. So the KCIA director, who is already in a bad mood due to his poor health, his constipation, and his irritation at having to run whores for the president, decides on the spot to murder Park and Cha.

This film provides examples of::