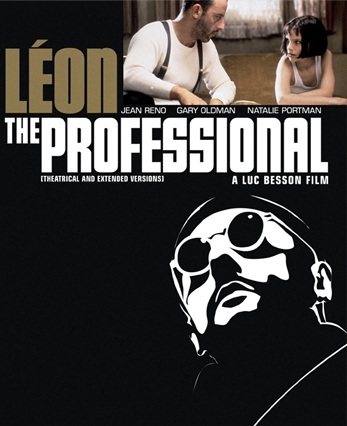 "No women, no kids. That's the rules."
— Léon
Advertisement:

The Professional — also known as Leon: The Professional and Léon in France and many other countries — is a 1994 film directed by Luc Besson and produced by Gaumont which stars Jean Reno, Gary Oldman, Natalie Portman (in her first major movie role) and Danny Aiello. It was inspired by Jean Reno's One-Scene Wonder character in Nikita, as a "cleaner" who ties up loose ends in operations-gone-awry, who became so popular that Besson decided to essentially make a whole movie about him, though the two films are otherwise unrelated. It was released by Columbia Pictures in North America, while in France it was released by Gaumont Buena Vista International.

Leone "Léon" Montana (Reno) is a quiet, skilled assassin whose next-door neighbors were just gunned down by crooked DEA agent Norman "Stan" Stansfield (Oldman) and his crew; the only survivor of the massacre is 12-year-old Mathilda Lando (Portman), who begs Léon to save her from the corrupt cops who murdered her family. Léon reluctantly takes Mathilda under his wing and, at her insistence, teaches her in the ways of his trade. Mathilda is intent on avenging her family by going after Stansfield— and Léon is intent on keeping Mathilda safe at all costs.

Mathilda gets handgagged by a member of the SWAT team so she cannot scream and warn Leon about the approaching police force.

Mathilda gets handgagged by a member of the SWAT team so she cannot scream and warn Leon about the approaching police force.